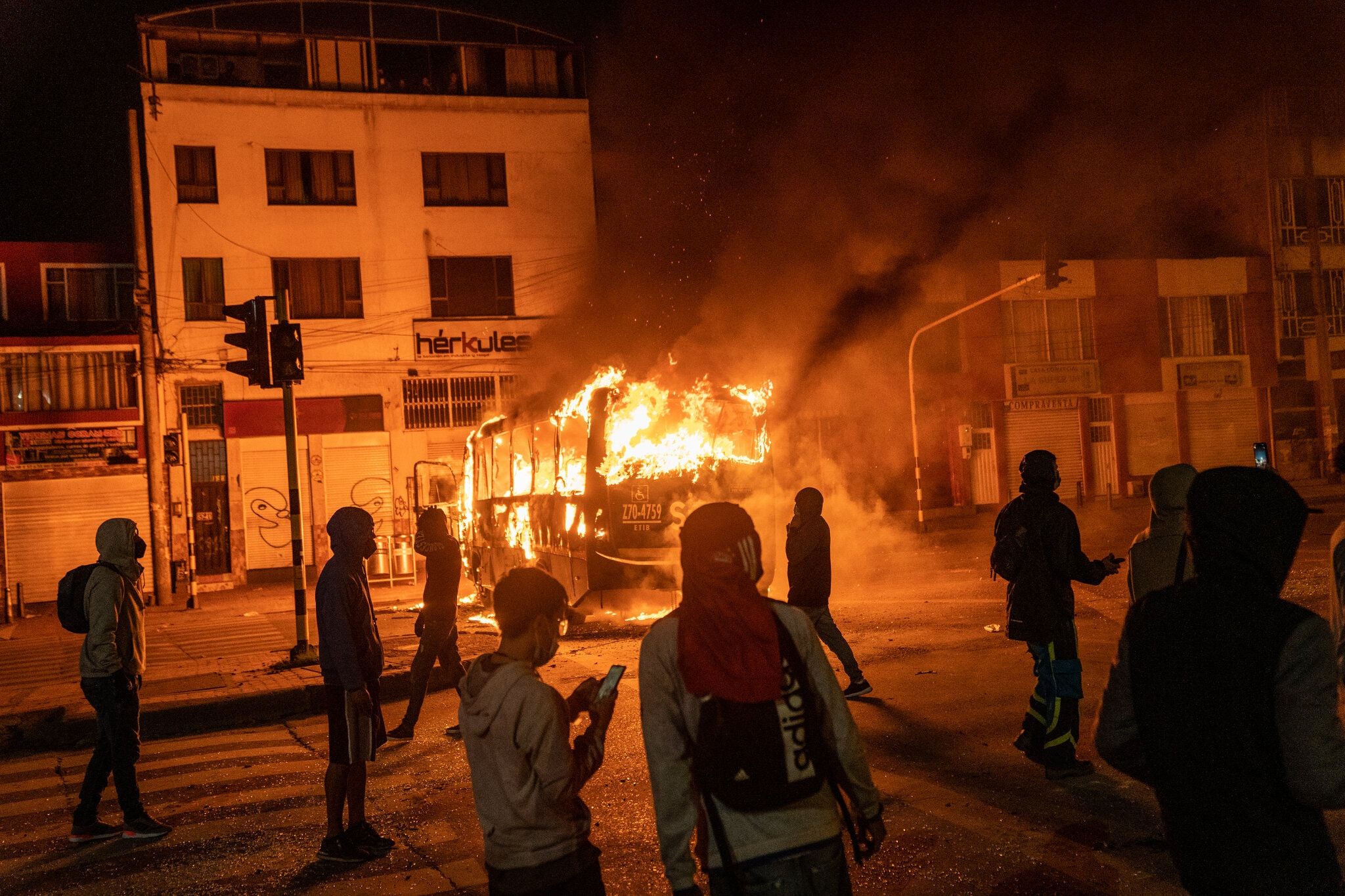 Colombia Is in Turmoil. Biden Must Push It Toward Dialogue.

Mr. Isacson is director for defense oversight at the Washington Office on Latin America and is an expert on security and peace in Colombia.

The news from Colombia is dispiriting. Two weeks after widespread protests began, at least 42 people, including one police officer, are dead, and the death toll continues to grow. Over 1,100 officers and protesters have been injured. At least 400 are believed to be missing, according to a local human rights group.

The protest started on April 28 over an unpopular tax overhaul. Led by labor unionists, students, small-scale farmers and advocates for the rights of women, Afro-Colombians, Indigenous communities and L.G.B.T. people, marchers are now voicing many other grievances over stark economic inequality, the government’s failure to carry out a 2016 peace accord with the country’s largest guerrilla group and violence against social justice activists. They’re also denouncing the response of security forces to the protests, which has been brutal, disproportionate and indiscriminate.

Colombia can’t afford to see the clashes on its streets escalate, and Washington needs to help the country find a way out of the turmoil. Demands need to be channeled into real dialogue between the protesters and the government. Dialogue has to be the priority before there’s more death, before the possibility of resolving differences peacefully is extinguished.

This is the country’s third wave of mass protest since November 2019. This one could continue to rage until the May 2022 presidential elections, making the country ungovernable. Or President Iván Duque could go the route the Maduro regime took in neighboring Venezuela, suppressing the protests violently, dealing a possibly mortal blow to democracy.

After the November 2019 protests over proposed economic measures, inequality, corruption and police violence, President Duque agreed to formal, perfunctory conversations at the presidential palace with the group of mostly union leaders that organized the demonstrations. That group was whiter, older and more male than the people in the streets. (It’s being pointed out, again, that the “strike committee” now in talks with the president is similarly unrepresentative of the broader population.)

The 2019 talks made no real progress: There was no mediation, facilitation or delegation to working groups. By early 2020, just as the protest movement was regaining momentum, the pandemic derailed the agenda.

Most of Colombia’s political leadership and business elite acknowledge that dialogue offers the only viable way forward. But a large portion of President Duque’s governing Democratic Center party, which is conservative with an authoritarian-populist streak, does not.

President Duque and his party are unpopular. Mr. Duque’s approval rating is below 35 percent. The Democratic Center’s most influential member, former President Álvaro Uribe, has an approval rating of 38 percent, a steep drop from his strong ratings when he was in office. The party faces a difficult path to maintaining power after Mr. Duque’s single term ends in August 2022.

Like other populist parties around the world, the Democratic Center wields power through a strategy of aggressively rallying its base: rural landowners, a segment of the business sector, religious conservatives and middle-class Colombians who want crackdowns on crime and disorder. That strategy feeds off the current unrest, especially the vandalism and looting around the fringes of what have been mostly peaceful gatherings.

These episodes of vandalism provide Mr. Uribe and his colleagues with fodder for the us-versus-them narrative, separating those they call “the good people” (gente de bien) from the leftist rabble. It’s a narrative they will leverage as elections approach and one that had eluded them after the historic 2016 peace accord, negotiated by President Juan Manuel Santos, with the Revolutionary Armed Forces of Colombia, known as the FARC, which is today a political party.

The Democratic Center appears to be on war footing, with Mr. Uribe attributing the vandalism at the protests to “politicians of the extreme left who provoke violence.” He worries that “this country has let its armed forces become weak” and adds that “there is an international incentive, especially from Venezuela, to install a regime here similar to the one in Venezuela in next year’s elections.”

This is the language of “Castro-Chavismo,” a term for describing socialism in Venezuela and Cuba as a common enemy. This view holds that the left has forgone guerrilla warfare in favor of a more pernicious strategy — Mr. Uribe calls it “dissipated molecular revolution” — that uses even peaceful dissent as a form of “hybrid warfare” to undermine the political system.

The narrative of a struggle against Castro-Chavistas is attractive to the ultraconservative Colombians who want the protests quashed. It also reverberates in the security forces.

There is an element of racism here, too. The epicenter of the protests has shifted to Cali, Colombia’s third-largest city, where thousands of unarmed people from Indigenous communities traveled from the countryside to join demonstrations. The country’s vice president, Marta Lucía Ramírez, suggested that the Indigenous groups are financing themselves through illegal means. Ómar Yepes, president of the Conservative Party, which is aligned with the Democratic Center, railed against these protesters, saying that the Indigenous organizations “come out of their natural habitat to disrupt the life of citizens.”

The narratives pushed by the Democratic Center are dangerous, but they are a comfort for some citizens whose struggles have worsened during the pandemic. Four in 10 Colombians are estimated to be living below the poverty line, and millions are in danger of joining them. More than 400 people a day have been dying of Covid in recent weeks, while just 8 percent of a population of 50 million has received a dose of the vaccine.

What the United States says and does — or fails to say and do — has always carried a lot of weight in Colombia. The Biden administration must distance the United States from such leaders through both words and actions.

The Biden administration must also distance the United States from certain elements of Colombia’s security forces, especially its riot police, the Mobile Anti-Disturbance Squadron, known as Esmad, whose brutal tactics are being condemned by human rights groups. As the number of victims continues to mount, the U.S. government should suspend its funding and sales to these security forces until Colombia returns to internationally recognized standards of law enforcement.

Mr. Biden should understand that disagreeing with radical politicians in the Democratic Center does not necessarily mean being silent about the vandalism and violence committed along the protests’ margins. Instead it means taking the side of Colombians who understand that only a political process, which includes the mechanisms of participation and dialogue established by the 2016 peace accord, will help the country overcome its daunting post-pandemic challenges.

Finally, it means providing Colombia with the best and most efficient means available to restore hope and reactivate its economy: vaccines.

By helping Colombia move toward dialogue, the Biden administration would be developing a template for engaging with counterparts throughout Latin America, where several countries battered by the virus are confronting authoritarian populism amid stark social divides.

Adam Isacson (@adam_wola) is director for defense oversight at the Washington Office on Latin America.

The Times is committed to publishing a diversity of letters to the editor. We’d like to hear what you think about this or any of our articles. Here are some tips. And here’s our email: Esta dirección de correo electrónico está siendo protegida contra los robots de spam. Necesita tener JavaScript habilitado para poder verlo..